Recently, we received a call from a family who needed quick driveway repair in South Lyon. The family had a son who had just turned ten. The son was really into basketball, so his dad tried to install a basketball hoop in the driveway. He must have really messed up the process, because he created a very large crack in one of the cement slabs of the driveway, and half of it was sunken in a few inches. He called us hoping for an easy solution, and he contacted the right company.

The driveway repair was scheduled.

The team arrived within a day of receiving the call. The team first started repairing the large crack in the driveway. They applied self-leveling polyurethane into the large crack to begin the concrete repair. The polyurethane will quickly thicken up while it is curing. The team then started the concrete lifting process on the cement slab that was sunken in the driveway. We started drilling quarter sized holes directly into the sunken cement. Once all of the holes were drilled, the team then began pumping in a closed cell polymer expanding foam. As the closed cell polymer expanding foam was being pumped in the sunken cement started raising slowly. Once the cement was level and back in the original location, the team then filled each hole with a cement mixture. The cement mixture is strong, so the homeowner will not have to worry about the holes coming open at all. We had the driveway repair completed within just a few hours. We were able to take care of his driveway repair that same day, and then the team gave him a few helpful tips on how to install the basketball hoop for his son. 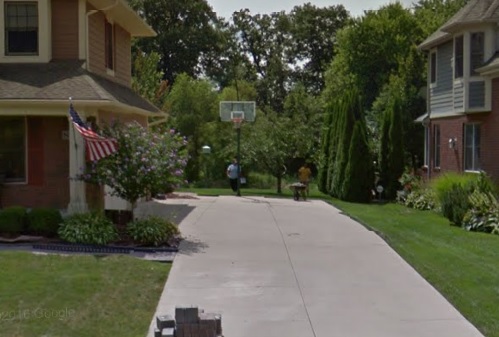 Not only was the father happy that he called the best concrete contractor around. His son was thrilled, because he had been wanting to play basketball at his house. The father thanked us continuously for coming out the same day and for having the cement repair done in just a few hours. He said his wife would have been furious if she would have seen the damage to the driveway. The homeowner remarked that we had saved him a lot of money, but you also saved me from hearing my wife complain. The team packed up all the equipment and as they were pulling away the dad was properly hanging the basketball hoop for his son.